During the Spartan Sprint earlier this year, I vowed that it would be my first and last obstacle course race (OCR). Then, a couple of months back, I did the Northface Outdoor Challenge. Last weekend, I completed the Viper Challenge in Cyberjaya. Okay, I admit it, I’ve been infected with the bug. Next year, I’ll be doing the Spartan Super and the Viper Challenge in Penang. If I can, I want to earn a Spartan Trifecta. #challengeaccepted

It feels weird. I was not a sporty kid. I used to be the last one that got picked for the team – only because they had to take me. To be canvassing for people to take part in this event on “my” team? That is just unreal. I think I’m scared not of the race but of the responsibility. There is still a small voice inside my head telling me I’m not good enough to do this.

The Viper Challenge took place in Cyberjaya on Saturday 8 December. I entered the race with a team of 17 parents and teachers from our school. I never imagined we would get that many people to join the team. They were as supportive a team as I could have hoped for – helping each other and pushing on together in the spirit of our school values.

They say we should be role models for our children. Well, if ever there was an example for the kids to witness, this would be it.

Of the three OCRs I did this year, I think Spartan was the hardest, Viper was the second hardest, and Northface was the easiest.

These are the obstacles we had to face (unfortunately, I can only recall 17 of them):

There were two rows of tyres, one above the other. We had to squeeze between them and exit on the other side.

This is the obstacle with the rings that you have to swing between – monkey-bar style – to get to the other side. 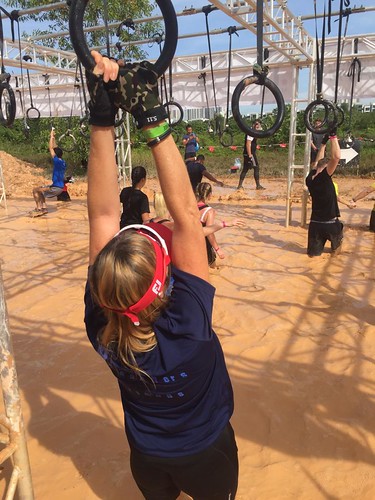 I made it to the third ring and fell, although, I was a little surprised that I even made it that far. My mistake was alternating my arms. I should always lead with the right hand because the left hand is significantly weaker. If I had done that, would I have made it to the fourth ring? Ah, those annoying questions running around in my mind!

This obstacle was erected over a chain-linked fence. It wasn’t too hard since we could use the fence for toe holds.

The other side was fairly straight forward – descending on horizontal bars like a ladder.

In this obstacle, we were standing knee-deep in water. We had to get over an inclined wall and down a cargo net on the other side. There was a cross team system going where the last team would help the first two members of the next team up so they could help the rest of their own team.

Someone offers a leg up at the base of the wall and another person helps to pull you up from the top. It was very do-able with help. 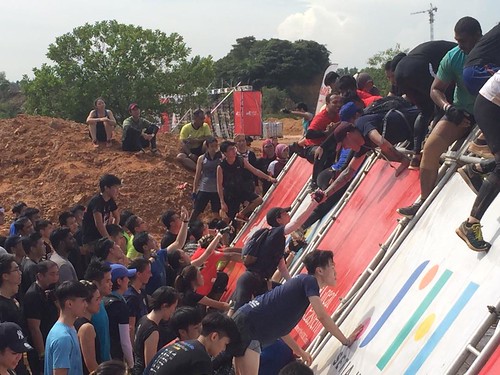 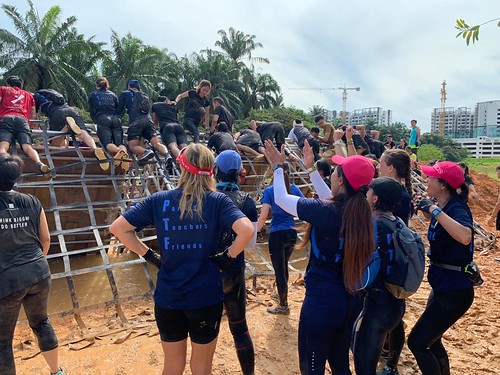 Climb up rope to Monkey Bars

Do they really have to make them so high up? We watched a guy fall from this with a serious injury. Several people had to carry him off. That threw off the mental game for a few of us. 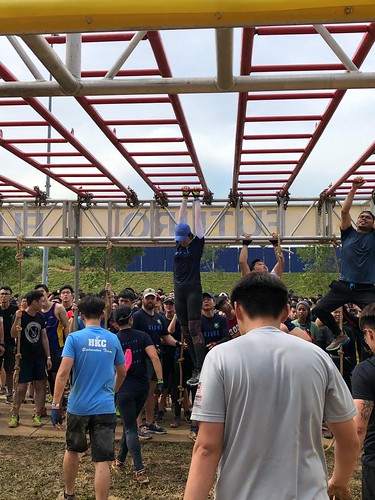 Yes… that’s me in the picture above thinking, “My hands are slipping and I am kind of high up.” Even with rubber-grip gloves, my hands were sliding on the bars. I think we need to start practicing monkey bars with wet hands. 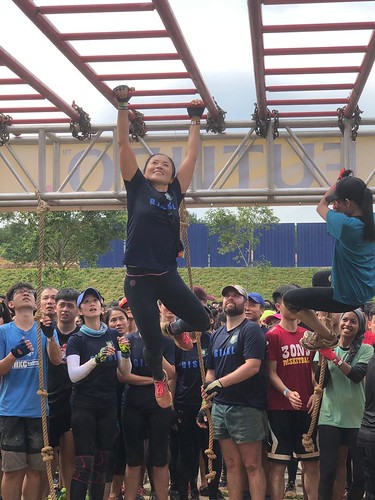 The goal of this obstacle is to climb up the rope, brachiate across the monkey bars and jump down on the other side. It sounds straightforward except that two of the bars spin and lots of people fall off when they get to it. If you look closely at the photo above, you can see that my team mate has her right hand on the spinning bar. 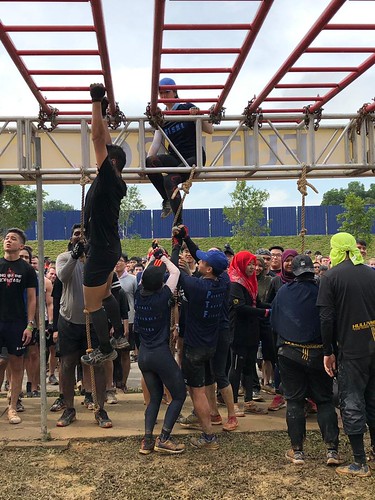 A girl from another team climbed up and traversed on top of the monkey bar so we tried that, too. 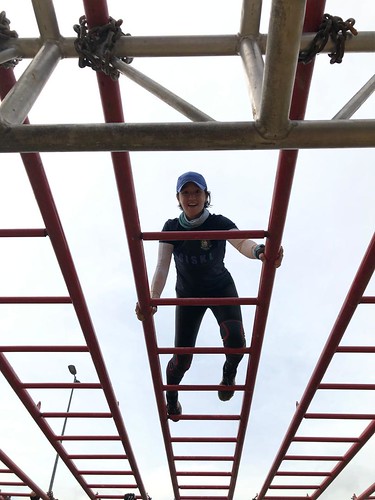 Definitely easier than brachiating, but pretty scary. Manageable if you don’t look down. 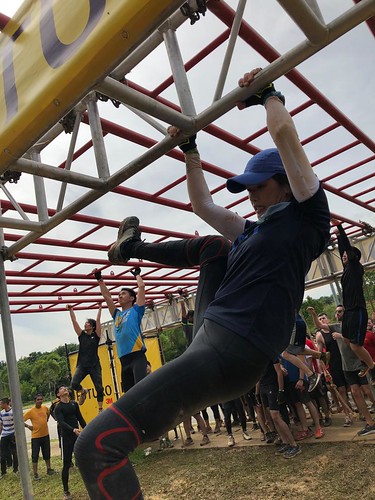 Viper closed off one of the obstacles because too many people were getting injured on it. It had what looked like a fishing pier and a cargo net. I gather that the idea was to run and jump off the end of the pier, then catch hold of the cargo net.

I guess this was the silver lining from starting late and suffering the heat – the first waves are the guinea pig for any new obstacles.

In this obstacle, we had to carry a weighted ball around a hill. The women carried 8 kg and the men had the 15 kg ball. 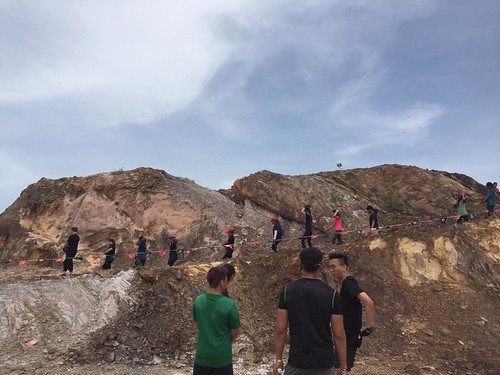 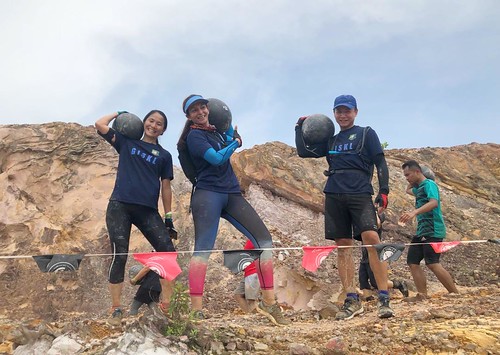 At the risk of sounding arrogant, I must say that this was a lot easier than the sandbag carry from Spartan. The weight was lighter, the distance was shorter, and the terrain was not as steep.

To get to this obstacle, we had to descend a fairly steep, muddy slope. There was a rope on the side that you could hold on to if you needed it. I found that having a good pair of trail shoes made it a lot easier to descend without having to use the rope. Thank you Adidas Galaxy Trail!

The obstacle involved crawling on your hands and knees under a fisherman’s net. Not very challenging – just muddy.

This is hands-down the most disgusting obstacle ever. What looked like a simple wade through water turned out to be a crawl through “quicksand”. Most of us went in standing, but we soon discovered that every step took us shin-deep into mud. It was impossible to keep moving without holding onto someone else to help dislodge our legs. We almost lost our shoes in the muck. 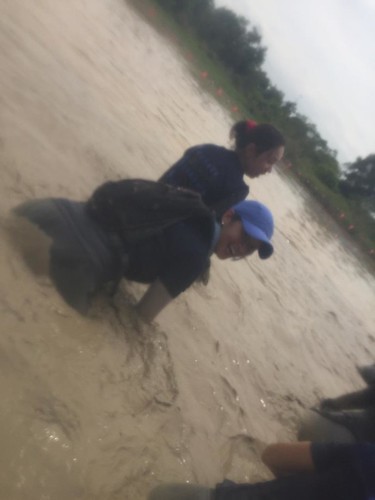 In the end, we had to crawl on all fours to get across. I thought we could wash off most off the mud after this obstacle but we ended up with more mud and muck. 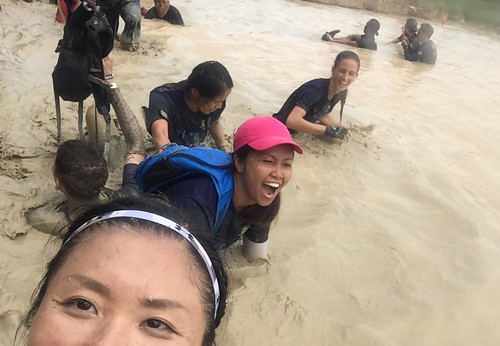 Another easy obstacle involving a climb over the cargo net and down the other side. 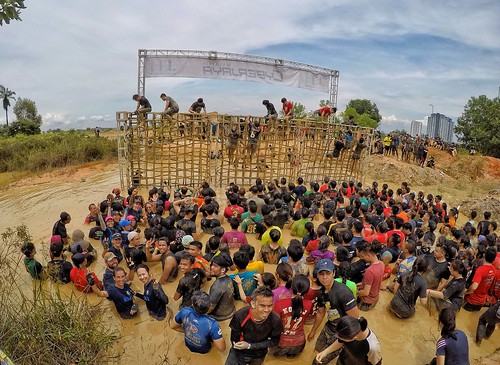 Why the question mark? Because I really have no idea how tall the wall was. Perhaps the people in the photo below might offer some indication of how high it could be. Suffice to say that only the tallest guy in our team could jump up and touch the top.

There was a shorter wall and most of us took that challenge instead.

Likes it says… you hop from one tyre to another until you reach the end. As easy as it is straightforward.

Over or Under the Tunnels?

Apparently we were supposed to crawl under these cylindrical tunnels. Well, nobody was there to tell us that so we went over them.

The Diamond Slide is a new obstacle on the Viper Challenge. It consists of a rope climb underneath, a zigzag traverse over the top and a slide down into a pool of muddy water at the end.

I skipped the zigzag traverse and slide because it was a 45 minute wait to get on it. Since I’d already done something similar at The Northface Challenge, I didn’t feel like I was missing much.

When I was a kid, we had a rope climb at school and I could do laps on it. Unfortunately, the body has forgotten how to behave the way the mind remembers.

When I did Spartan earlier in the year, I failed the rope climb. I told myself I failed because my arms were tanked after the bucket carry. Secretly, my mind has wondered whether I really could have done it if I was fresh. Now, I can lay this uncertainty to rest. I made it up the rope and I rang that bell, and I did it the way I used to as a child. Of all the obstacles, this was the one I felt the most proud of.

Some people do the step where they run the rope under one foot and around to the top and then trap it with the other foot. That’s probably the more efficient way of doing it but I couldn’t seem to figure out how to do it. For me, I find it easier to twist the rope around the right leg and then step on it with the other foot to hold it in place.

This is harder than it looks because it’s loose on one end and, as you climb up, your legs push it out horizontally so it’s like hanging on an overhang in rock climbing.

In the Viper Challenge, the goal is to work as a team and help each other, so two people held on to the ends of the ladder while the third climbed to the top. This helps to keep the ladder relatively vertical.

Bouldering on overhangs is definitely a good way to train for this obstacle.

This obstacle consisted of two slack lines crossing at the middle. It wasn’t much of a challenge because there were two overhead slack lines to hang onto for balance. It was nothing we hadn’t done a dozen times over at SkyTrex.

And that brings me to the end of the race. Viper was better organised than the Northface Challenge, but it was still short of Spartan standard. It was a queuing race – queuing to get our race tags, queuing for the bag drop, queuing to get on the obstacles, queuing to get our bags back, queuing to get into the showers. Spartan wasn’t like this – admittedly, I joined the Elite category for that race so I think I might have bypassed a lot of the crowd.

On the whole, though, it was still a great experience. I enjoyed working with the team and I loved how supportive everyone was. There is a real camaraderie in facing difficult challenges that shows how willing people are to help others. More than any other kind of race, this is what I enjoy most about an OCR – people who are willing to help you even when they don’t know you.