In an attempt to wrap my head around the sort of obstacles we will be facing, I have been digging around the Spartan Website. You can read descriptions of the obstacles until the cows come home but that will never really help you understand what you’re in for until you see the videos and the photos. Yes, they have filled me with such trepidation that I wonder if I have been a tad too hasty to announce my commitment.

Perhaps I am freaking myself out unnecessarily since the obstacles I’m looking at may not actually be same ones on race day. Then again, I prefer to know what kind of challenges I might have to face so I can be sure I have a fighting chance of completing them. Spartan Race is not like a marathon where the physical ability to complete it is there – even if it means walking, or crawling, over the finishing line. If you lack that upper body strength, no amount of will power is going to get you past those Monkey Bars.

Just looking at this list of obstacles, I can already see where the Burpee Penalty will be unavoidable unless I do some serious training for it.

Climb up the rope, then brachiate from one end to the other until you reach the bell. This is a lot farther than any set of monkey bars I’ve ever encountered. Not to mention that the bars sag so you have to swing up to get to the center. And you can’t use your legs so there goes that option…

This one looks do-able – especially if you wear longs and drag your legs like what this guy is doing.

Like it says – hoist a weight up by pulling on a rope until it reaches the top. It sounds easy enough until you watch these ladies in action. If you’re wondering how heavy that weight is, Spartan Race Warriors says it’s about 32 kg for the women. This is probably one time when it pays to be on the heftier side.

This looks do-able, too – not easy, but do-able. Although, I’d hate to be vertically challenged for this one. I will definitely need gloves or I’m going to have to start carrying a chalk bag.

And there I thought we could use those holes… As a former rock climber, my instinct would be go for the handholds. Looking at his purchase on them, they’re not exactly jugs, but neither are they crimps. If he can get at least two knuckles around them, I think it’s decent enough. That said, the rock climber’s technique is to get as close to the wall as possible and stand on tiny footholds, so this one might require some experimenting at the climbing gym.

This currently looks like the only obstacle I can be sure to get through without incurring the burpee penalty. It is higher than I first thought it would be. I had imagined one those army crawls where you’re literally dragging your body along the ground on your forearms.

Oh dear, this looks like it’s going to be another burpee penalty for me. I have no words.

Drag a weight. Seems straightforward enough. Based on someone’s answer on Reddit, sleds are:

Plus the weight of the sled, water, and whatever material is stuck on the sled (dirt, mud, grass). That would make it similar to the weight of our luggage when travelling overseas. Okay, I think I can do that. 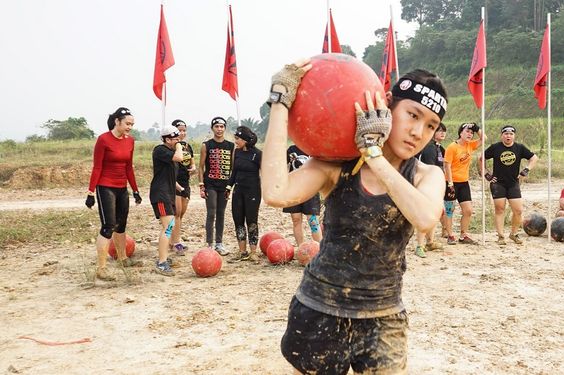 This cement ball is slightly heavier than the Herculean Hoist:

I’m not even sure if I can do what this girl is doing.

I know I could have done this back in my rock climbing hey day. Now, I’m not so sure.

To get through this obstacle, you need to throw the spear and make sure it sticks in the hay bale without falling out. It’s a Burpee Penalty if your spear falls out. I would have thought this was fairly easy, except that Spartan Race Warriors says 86% fail this obstacle. Really?

You know, like the ones at the playground only longer and higher. Except the bars in this one look kinda far apart. What if you’re short and have short arms?

Like the Monkey Bars, this one’s pretty self-explanatory. Where it gets tricky is that you’re going to be wet and muddy while you’re doing it. I remember having to do this as a child in Primary School and it was easy enough back then. While I still remember the theory, I wonder if I can say the same about executing the moves.

This looks like another rock climbing challenge which I would have felt quite comfortable on if I was still rock climbing. Also, I don’t think we’ll be wearing climbing shoes on the day so this obstacle is going to be that much harder. Throw in the mud and it’s going to be rock climbing hell. I wonder if they’ll let you take your shoes off? Barefoot has got to be easier than trying to edge in over-sized shoes.

This is going to be another challenging one. It appears that you can have team mates help you up the wall, though. I wonder if it’s a Burpee Penalty if you use the wooden buttress as a foot aid?

The tyres weigh 90kg for the women’s obstacle and 180kg for the men’s obstacle. I read somewhere that you need to flip it forward twice and back twice. I’m not sure if that’s correct though.

90kg sounds pretty heavy, but the woman in the video looks like she’s not struggling too much. She could still talk while demonstrating the task which makes me wonder if 90kg is correct. 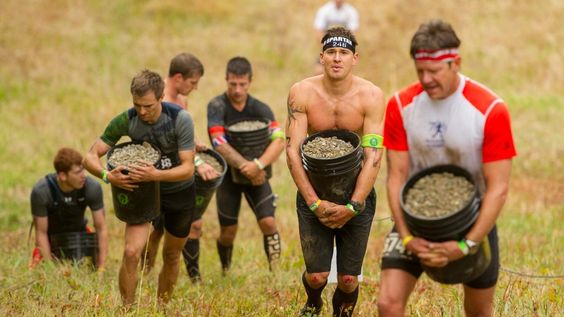 Fill a bucket with rocks, walk along the prescribe path, and return with all your rocks still in the bucket. It’s a 19L bucket and will weigh about 30 to 45kgs. The distance you have to trek is about 180 to 280m and it will have inclines and descents.

Jump Over the Fire 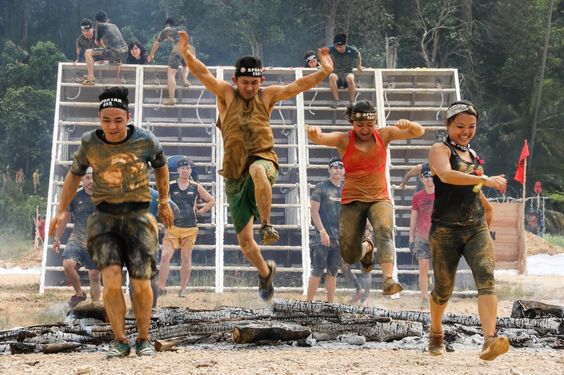 This is apparently the final hurdle and it seems easy enough compared to the other obstacles. The question that remains is whether I’ll make it to this task…

All in all, there are about 19 obstacles listed here. They say that the Spartan Sprint comprises of about 20 to 25 obstacles. I’ve seen pictures of other obstacles, but they look “tame-ish” compared to these ones. I’m sure we’re entitled to a few “easy” ones given that they’ll probably feel like anything but easy when we have to do them in between all that running and these obstacles.